A fire at the U.S. Freeport LNG export facility two months ago continues to have multiple long-term effects on the domestic and international natural gas markets. The fire on June 8 forced a shutdown of the facility and slashed nearly 2.0 Bcf/d from the U.S. export capacity, futher tightening international gas markets when European buyers are searching for additional suppies of gas.

The limited export capacity has tightened supplies outside of the U.S. and led to a modest increase in local supplies within the U.S. Prices, in response, have responded. The U.S. benchmark price at Henry Hub fell by $1.27/MMBtu to $8.16/MMBtu two days later. Prices continue to slide within the U.S. in response to the backlog of supply. The U.S. Energy Information Administration that exports fell 1.5 Bcf/d in June from May to about 10.1 Bcf/d. The agency added it expected U.S. exports to remain below average, at 10.5 Bcf/d in 2H22, about 1.8 Bcf/d lower than its previous forecast.

As U.S. gas prices slide, the agency revised its forecast to show that it expected consumption in the industrial and electric power sectors to climb. The additional demand, however, only partially offsets a decline in exports and other local consumption. Overall, demand is expected to fall by 0.7 Bcf/d.

By the spring of 2023, the agency forecast that U.S. natural gas production will increase and inventories will build back to their five-year (2017–2022) average levels, putting additional downward pressure on prices. The July STEO forecasts the 2023 Henry Hub spot price will average $4.76/MMBtu.

Freeport LNG is one of seven LNG export facilities operating in the United States. Freeport LNG has three operating liquefaction units that have a combined baseload capacity of 1.98 Bcf/d and a peak capacity of 2.14 Bcf/d.

The facility shipped its first LNG cargo in September 2019. The company announced that it does not expect the terminal to return to full service until October, although it aims to have the terminal partially operating in approximately 90 days.

In late July, Freeport LNG announced it is drawing a small amount of gas off its pipeline connections to fuel a gas-turbine generator at its natural gas pretreatment facility to generate and exports about 50 MW of power to local electric grids, Reuters reported. 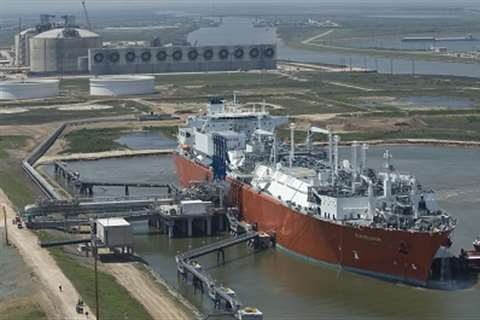