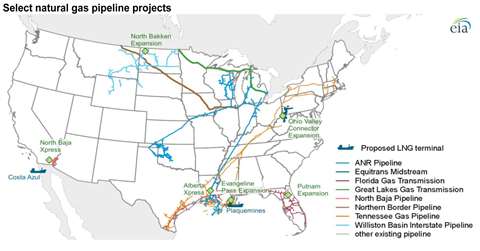 The first and largest pipeline, the Evangeline Pass Expansion Project, is a 1.1 Bcf/d pipeline owned by Tennessee Gas Pipeline Company, a division of Kinder Morgan. The project includes 13.1 miles of new pipeline and two new compressor stations that will deliver natural gas to the proposed Plaquemines LNG Project in Plaquemines Parish, Louisiana.

The second pipeline, the Alberta Xpress Project is a 0.165 Bcf/d line owned and managed by ANR Pipeline Company, a division of TC Energy. The new pipeline will use capacity from the Great Lakes Gas Transmission system and the ANR pipeline and will add a new compressor station in Evangeline Parish, Louisiana. The project will boost capacity from the GLGT receipt point at the Minnesota-Manitoba border to delivery points in the U.S. Midwest and the U.S. gulf Coast. It will boost available capacity for LNG export facilities in the region and will improve domestic gas infrastructure in those regions.

ANR will also make minor modifications at one of two existing mainline valves (MLV 2 or MLV 3) in Evangeline Parish to enable gas to be purged from the Southeast Mainline 501 pipelines in conjunction with construction of the new compressor station. The project is expected to cost around $81.1 million.

The FERC gave conditional approval to the project, which is in La Paz County Arizona and Imperial County, California. The permit enables North Baja, a division of TC Energy, to deliver natural gas from West Texas and the Rocky Mountains to markets in the western U.S. and Mexico.

The project will enable North Baja to provide nearly 0.5 Bcf/d of firm transportation service for Sempra LNG International from the existing El Paso Natural Gas Company metering station in Ehrenberg, Arizona to the Ogilby meter station near Obilgy, California. The gas will ultimately be exported to Mexico.

It will also install additional flow measurement facilities and make piping modifications at the existing El Paso Meter Stations in La Paz County, Arizona and install additional flow measurement facilities at the existing Ogilby Meter Station in Imperial County, California. North Baja told the FERC the project will cost an estimated $127.2 million and should be in service by Nov. 1. North Baja has signed a binding, 20-year agreement with Sempra LNG for all of the project’s capacity, the FERC reported.

The North Bakken Expansion Projects is a 62-mile extension of the Williston Basin Interstate pipeline system. The project will add 0.25 Bcf/d in takeaway capacity from the Bakken in North Dakota and connects to the Northern Border Pipeline, the EIA reported.

For all of 2021, the EIA estimated that U.S. midstream companies added 7.44 Bcf/d in new interstate pipeline capacity, the lowest since 2016. 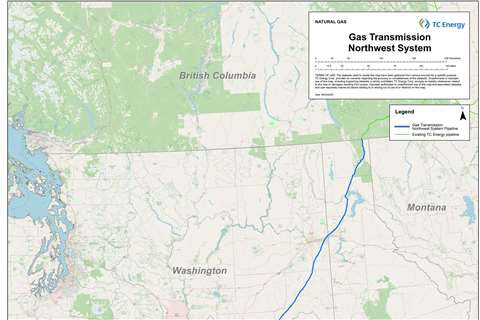