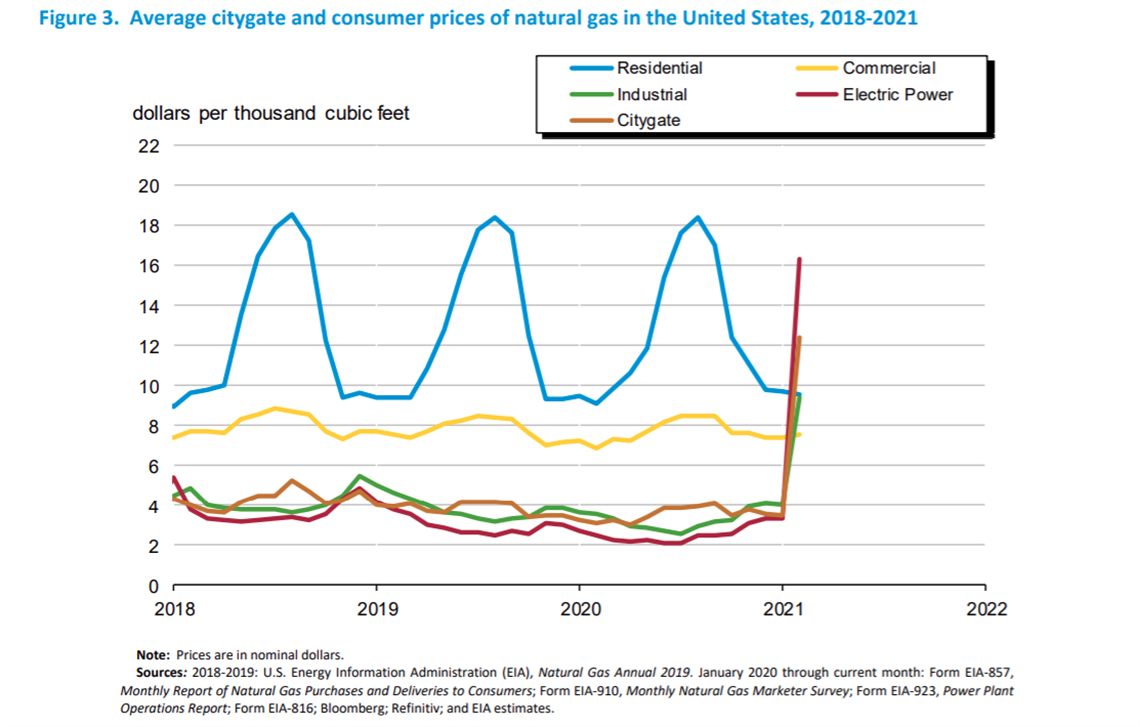 Citygate historical prices, as tracked by the U.S. EIA.

Falling production, record cold temperatures and a surge in demand for gas in February led to record prices in some parts of the U.S., according to data released by the U.S. Energy Information Agency (EIA).

Preliminary data from the agency showed that U.S. gas production was 86.3 Bcf/d in February 2021, down nearly 9% from February 2020. February marked the 10th consecutive month that production decreased from the prior year. Despite the year-over-year decrease, the average daily production for February was the third-highest for the month since the agency began tracking monthly dry production in 1973.

On the consumption side, demand for gas was 108.5 Bcf/d in February, almost 4% higher than one year ago. Overall monthly consumption in February was the highest since the agency began using the current definitions for each consuming sector in 2001. Extreme cold weather in several states led to the strong demand, the EIA reported.

Even as total U.S. gas demand surged in February, that growth was uneven among each sector of the market. Residential and commercial deliveries rose while industrial and electric power deliveries fell.

In February 2021, some natural gas prices, especially citygate, electric power, and export prices, reached record highs in several states because of extreme cold temperatures in that month. The citygate price for the U.S. was $12.48 per Mcf, the second highest for any month since the EIA began tracking citygate prices in 1983. Kansas, Oklahoma, and Texas all reported prices significantly above the previous record highs.

The price for gas sent to the electric power sector was $16.29 per Mcf, the highest for any month since the agency began tracking those prices in 2002. This price was 31.3% higher than the previous highest price of $12.41 per Mcf in June 2008. Kansas, Nebraska, New Mexico, Texas, and Wyoming all reported record high prices, in some cases several times higher than the previous highs.

This record high price was in large part driven by the price of natural gas pipeline exports to Mexico, which was $27.03 per Mcf for the month, or 132% greater than the previous highest price of $11.65 per Mcf in June 2008.

As the U.S. gas prices spiked, data from the EIA show that the total volume of imports of gas rose while the total volume of gas exported fell. Imports of gas for February were 9.7 Bcf/d, up 18.4% from the prior year. Total exports were 15.3 Bcf/d, down 2.6% from February 2020. Despite the decline in exports, the EIA reported that February was the second highest since the agency began tracking monthly exports in 1973. 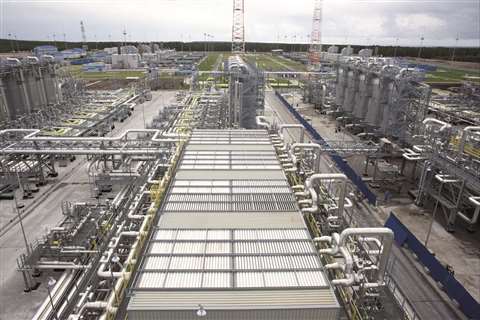 Citygate historical prices, as tracked by the U.S. EIA.
Previous Next ×