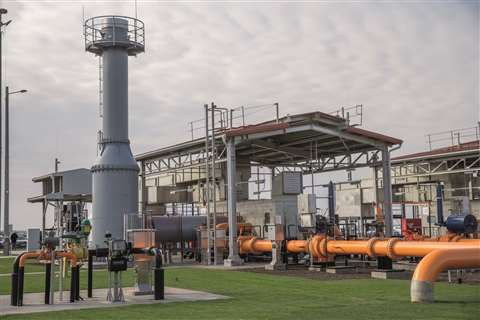 The projects on the updated list include a planned upgrade of the the Csanádpalota compressor station in Hungary.

The projects included are cross-border energy infrastructure plans that are recognized as building a more integrated EU internal energy market and pursuing the bloc’s energy and climate goals.

All PCI projects are subject to streamlined permitting and regulatory procedures and eligible for financial support from the EU’s Connecting Europe Facility (CEF), the Commission noted.

The PCI list did not include any new gas projects that had not been present on previous lists. Those carried over from previous lists are viewed as necessary to the security of EU gas supplies. This comes as the EU tries to move away from funding fossil fuel projects, even though a transition period is in place until the end of 2029 for gas projects that would then be converted to hydrogen.

The gas projects on the updated list include Phase II of the Bulgaria-Romania-Hungary-Austria (BRUA) pipeline, which will require the upgrade of the Csanádpalota compressor station in Hungary to improve bi-directional capacity and the expansion of the Jupa, Bibești and Podișor compressor stations in Romania.

Also on the PCI list is the Croatia-Slovenia-Austria interconnection, which includes the second phase of upgrades to the Kidričevo compressor station in Slovenia and the construction of a new compressor station at Murfeld, Austria.

The updated PCI list was passed for approval to the European Parliament and European Council.

Europe continued to struggle with a natural gas supply crunch, with the situation exacerbated by limited flows of Russian gas to the continent.

On January 13, flows on the Yamal-Europe gas pipeline remained reversed for a 24th day, flowing eastward from Germany to Poland instead of westward, according to German network operator Gascade. Flows of Russian gas to Europe via Ukraine also remained lower than normal.

Consultancy Inspired Energy attributed this to traders opting to withdraw gas from storage in an effort to avoid paying prices that are close to record highs.

The International Energy Agency’s (IEA) executive director, Fatih Birol, has claimed that Russia’s actions are also contributing to the tightness in the European gas market. He said on January 12 that Russia could increase gas deliveries to Europe by at least one-third.

This has played out against the backdrop of heightened geopolitical tensions over Ukraine. Russia has stationed about 100,000 troops close to the Ukrainian border. This has led the US and its allies to warn that severe sanctions could be imposed on Moscow if Russia invades Ukraine.

Russia’s Nord Stream 2 pipeline, which will be used to ship gas directly to Germany, was declared ready to enter service in December. The pipeline still needs regulatory approvals from Germany and the European Union before it can be placed into service, and faces opposition from countries including Poland and Ukraine.

The final approvals are not anticipated before the second half of 2022. However, US deputy secretary of state Wendy Sherman warned on January 12 that new Russian aggression against Ukraine could have an impact on Nord Stream 2’s fate.

“From our perspective, it’s very hard to see gas flowing through the pipeline or for it to become operational if Russia renews its aggression on Ukraine,” she told media in Brussels.

Sherman’s comments came after Russian Deputy Prime Minister Alexander Novak said in late December that Europe was missing out on additional Russian gas supplies via Nord Stream 2 as the continent continued to struggle with a supply crunch and rising prices.

Poland’s Gaz-System announced on November 18 that construction of the offshore section of the Baltic Pipe pipeline, which connects Denmark and Poland, had been completed.

The 275-km (171-mile) section of pipeline crosses Danish, Swedish and Polish waters. Contractor Saipem laid and welded more than 22,000 pipes with a nominal diameter of 900 mm (35.4 inches) for this part of the project.

Then, on December 21, Denmark’s Energinet said that eight weeks of hearings had begun on the environmental permit for the Danish section of Baltic Pipe. This comes after the original permit was repealed in June 2021 by the Danish Environmental and Food Appeals Board. The board found that the Danish Environmental Protection Agency (DEPA), in issuing the permit, had not sufficiently described the measures that would be taken in relation to protected species of wildlife along the pipeline’s route.

A new environmental assessment report has now been drafted and presented for public hearings. Energinet said that it anticipates receiving a new permit by March 1, after which it can continue construction on onshore sections of the pipeline that had stalled when the original permit was repealed.

Danish power company Cerius is also expected to resume construction of the remaining 50,000-volt powerline – one of two that will supply power to the compressor station in Everdrup – after a new permit is issued.

Baltic Pipe is still expected to begin partial service by the original start date of October 1, 2022, though the entire project is now anticipated to only be fully operational by January 1, 2023. At full capacity, Baltic Pipe will be able to transport 353 bcf/y (1 × 1010 m3/y).

The drones are intended to detect the leakage of methane and will be deployed to monitor Amber Grid’s gas network. A second, view transmission drone comes with the set, the company said.

The partners also expect the technology to help with efforts to lower CO2 emissions from gas infrastructure.

“The importance of innovations is significant for ensuring safety within the gas network, because it helps to undertake the most important works more efficiently with less traces of CO2,” stated Amber Grid’s technical director, Andrius Dagys. “We very much hope that the new technology, after it has been fully mastered, will help to achieve environmental and gas pipeline reliability goals. We are one of the first operators following this path.”

Åsgard was the world’s first subsea gas compression facility when it first came online in 2015.

Aker Solutions said it had been awarded an engineering, procurement and construction (EPC) contract by Norway’s Equinor to install a subsea compression module at the Åsgard gas field.

The scope covers EPC of the fifth subsea compression module to be delivered by Aker for the Åsgard subsea gas compression system, the company said. It will be a replica of the fourth module, and will be built in part by using existing equipment.

The module is due to be ready for delivery to Åsgard, in the Norwegian Sea, in August 2024.

Åsgard became the world’s first subsea gas compression facility when it was brought online in 2015. Aker delivered the two-train facility. Equinor says on its website that the technology from Åsgard is one of its most important measures for boosting production volumes from existing fields on the Norwegian continental Shelf (NCS).

The system’s existing compression modules are now being refurbished and upgraded to accommodate a higher compression ratio as Equinor prepares for extended operations at the Åsgard field.

Anna Kachkova is an independent oil and gas writer based in Edinburgh, Scotland. She has over 13 years’ experience of covering the energy industry, including five years in Houston, Texas, as NewsBase’s North America editor. Her email address is: aikachkova@gmail.com.