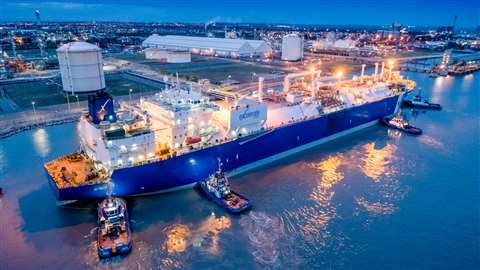 The Exemplar is expected to be based at Inkoo once the port structures there have been completed, under a 10-year charter deal with Gasgrid. (Photo: Excelerate.)

The European Union has hit its gas storage target two months ahead of schedule. European Commissioner for Energy Kadri Simson announced on August 31 that the EU’s gas storage facilities were more than 80% full, ahead of the bloc’s target date of November 1 for reaching that level.

Not all EU countries have underground gas storage capacity, but 10 of those that do have exceeded the 80% target already and a further six have met their intermediate target for September 1 and continue to fill their gas storage.

Meeting the overall EU gas storage target ahead of the winter puts the bloc in a better position for dealing with further supply cuts amid unexpected maintenance on the Nord Stream pipeline from Russia to Germany.

With ongoing supply disruptions remaining a possibility, the EU agreed on a demand reduction plan earlier this year in order to help its member countries through the next two winters. That plan calls for gas consumption to be reduced by 15% between August 2022 and March 2023, with a possibility of the target becoming binding if the situation worsens.

Meanwhile, EU members are in disagreement over a European Commission proposal to put a price cap on Russian gas supplies.

Both Estonia and Finland are making progress on construction of LNG import infrastructure as they prepare for the arrival of Excelerate Energy’s Exemplar floating storage and regasification unit (FSRU).

In Estonia, Elering, Alexela and Infortar are building an LNG terminal in Paldiski, while in Finland, Gasgrid and Fortum are working on an LNG import facility in Inkoo. Exemplar is due to serve both markets and will initially dock at whichever facility is completed first. Ultimately, it is expected to be based at Inkoo once the port structures there have been completed, under a 10-year charter deal with Gasgrid.

On both sides, the companies are targeting completion of their respective terminals by December, with commercial operations starting in January 2023 if the remaining work progresses on schedule.

In Estonia, Elering is building a ship-to-shore pipeline that it is aiming to complete by the end of November, and is making modifications to the Paldiski compressor station in preparation for connecting the pipeline. In Finland, Gasgrid said in mid-August it had made a start on port structures and a gas pipeline.

Progress on the LNG import infrastructure comes as the broader region works to end its dependence on Russian gas. Latvia is also working to expedite construction of a proposed LNG import terminal at Skulte, with the country’s government agreeing to grant the project national interest status in late August.

French gas transmission system operator GRTgaz announced in mid-September that new gas export capacity from France to Germany would be available from mid-October.

“Historic gas flows from the east have been reversed under the effect of the war in Ukraine,” GRTgaz said in a statement, adding that it was working on adapting its network to allow for new exports. The transmission system operator said earlier in September that tests carried out on the gas interconnector linking the border areas of Obergailbach and Medelsheim had been successful.

The latest announcement came as flows on the Nord Stream gas pipeline from Russia to Germany remained suspended. (See next story) France, meanwhile, benefits from existing LNG import capacity. GRTgaz said France’s LNG import terminals were operating at 90% capacity, and had helped the country fill its gas storage facilities to 94%, above the European average.

The plan still requires regulatory approval, but if it goes ahead as expected, it will allow GRTgaz to sell up to 100 gigawatt hours per day of gas to Germany.

Russia’s Gazprom took the Nord Stream pipeline to Germany offline for what was initially supposed to be three days of maintenance on August 31.

The company subsequently said it had detected a leak of engine oil in the only turbine still operating at the Portovaya compressor station. As a result, the compressor station no longer complies with safety requirements and gas flows on Nord Stream will remain suspended until the turbine can be repaired, Gazprom said.

Gazprom’s deputy CEO, Vitaly Markelov, told Reuters in early September that Siemens Energy would need to repair the faulty equipment in order to return the pipeline to service. However, Siemens has disputed the claim that the leak requires operations to be suspended, saying that such leaks do not normally affect turbine operations and can be sealed on site. The company added that there were enough other turbines available at the Portovaya compressor station for Nord Stream to keep operating.

As of early September, Siemens was not commissioned by Gazprom to carry out the necessary maintenance work on the turbine with the suspected leak, but said it was on standby.

Germany has also dismissed Gazprom’s claims about turbine issues as a pretext for disrupting gas supplies to Europe after relations with Russia deteriorated in the wake of the war in Ukraine.

Bilfinger announced in mid-August that it was providing engineering support to Gasunie for the HyStock underground green hydrogen storage project in the Netherlands.

The planned facility will store energy generated from renewable sources such as wind and solar in deep underground salt caverns that will be available in both the short and long term. It is aimed at offsetting any future imbalance in supply and demand of green hydrogen. Bilfinger Tebodin Netherlands will be providing basic engineering services for the entire plant, including equipment, piping, pipelines, buildings and infrastructure.

Compressor stations will be used to inject around 2.6 Bcf (7.6 × 107 m3) of hydrogen into each of the four planned caverns at the facility. The above-ground installation and first cavern are expected to be operational by 2026, with Gasunie aiming to store around 26mn kg of hydrogen.

Bilfinger noted that the project represented a completely new approach to large-scale hydrogen storage, but one that was a “very promising solution” from a technical and economic point of view. It added that buffering hydrogen to balance production and demand at gigawatt scale requires the injection and extraction of large amounts of hydrogen over short periods of time and that therefore caverns must be found that are particularly suitable for rapid hydrogen delivery.

Bilfinger’s announcement comes after the government of the Netherlands unveiled a national hydrogen network plan in late June. The network will be developed and operated by Gasunie, and while plans call for it to be established by 2031, the company will aim to bring some parts online by 2026.

PDC to supply compressors to Hynion for hydrogen filling stations

Norway’s Hynion announced in late August that it had selected PDC Machines to supply compressors for its new hydrogen filling stations that will be built in Västerås and Jönköping in Sweden.

The projects represent a new generation of stations with the capacity to refuel dozens of trucks per day. Each station will deliver hydrogen at 35 and 70 megapascals (MPa), servicing both light and heavy-duty vehicles and providing continuous delivery of the fuel. Hynion noted that “dependable and robust” compressors would be required for these facilities.

PDC will provide two compressors for each station. Hynion is aiming to bring the stations into service by the end of 2023. 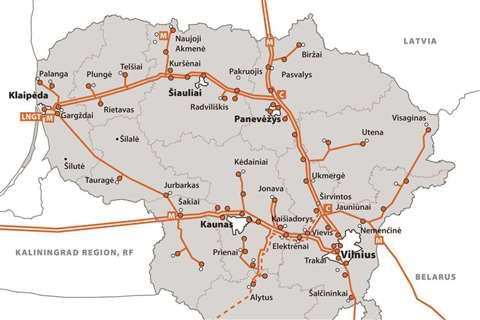