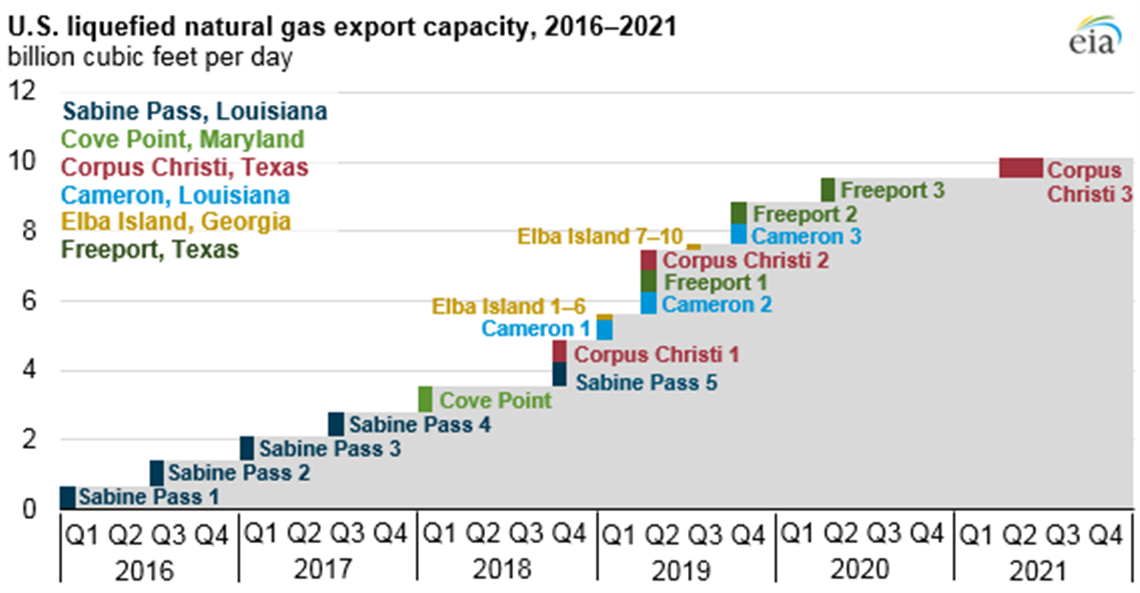 The U.S. Energy Information Agency (EIA) projects that U.S. liquefied natural gas (LNG) export capacity will reach 8.9 billion cubic feet per day (Bcf/d) by the end of 2019, making it the third largest in the world behind Australia and Qatar.

Currently, U.S. LNG export capacity stands at 3.6 Bcf/d, and it is expected to end the year at 4.9 Bcf/d as two new liquefaction units (trains) become operational.

The United States began exporting LNG from the Lower 48 states in February 2016, when the Sabine Pass liquefaction terminal in Louisiana shipped its first cargo. Since then, Sabine Pass expanded from one to four operating liquefaction trains, and the Cove Point LNG export facility began operating in Maryland. Two more trains—Sabine Pass Train 5 and Corpus Christi LNG Train 1—began LNG production this year, several months ahead of schedule, and are expected to ship their first cargos within the next few weeks.

Two more LNG export facilities—Cameron LNG in Louisiana and Freeport LNG in Texas—are currently being commissioned. The first LNG production from these facilities is expected in the first half of 2019. The developers of these projects expect all three trains at Cameron LNG and two trains at Freeport LNG to be placed in service in 2019.

The Elba Island LNG facility near Savannah, Georgia, USA, is also scheduled to become fully operational by the end of 2019. Elba Island LNG consists of 10 small modular liquefaction units with a combined capacity of 0.33 Bcf/d. Project developers expect LNG production from the first train to begin early next year and from the remaining nine trains to commence sequentially through the rest of 2019. The second train at Corpus Christi LNG is scheduled to be placed in service in the second quarter of 2019. The final two trains of the U.S. liquefaction projects currently under construction—Freeport Train 3 and Corpus Christi Train 3—are expected in service in the second quarters of 2020 and 2021, respectively.

Four additional export terminals—Magnolia LNG, Delfin LNG, Lake Charles, Golden Pass—and the sixth train at Sabine Pass have been approved by both the U.S. Federal Regulatory Commission and the U.S. Department of Energy, and they are expected to make final investment decisions in the coming months. These proposed projects represent a combined additional LNG export capacity of 7.6 Bcf/d.