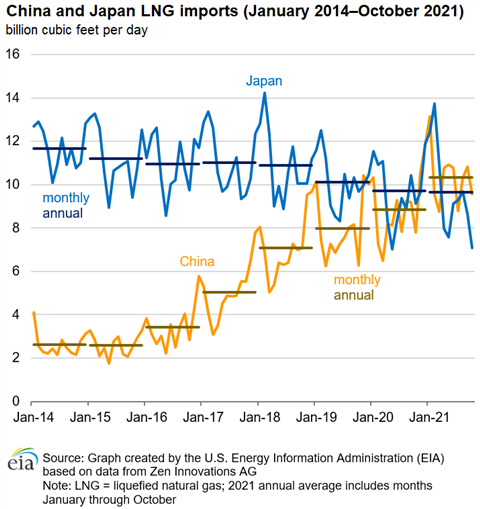 China’s has surpassed Japan as the world’s largest importer of liquefied natural gas (LNG), according to a report from the U.S. Energy Information Administration that covered the first 10 months of 2021.

Citing data from China’s Administration of customs and Japan’s Ministry of Finance, China’s LNG imports averaged 10.3 billion cubic feet per day (Bcf/d) while Japan imported 9.6 Bcf/d over the first 10 months of the year. China’s imports of LNG rose 2.0 Bcf/d, or 24% from the previous year and have grown steadily every year since 2006, except for 2015.

Imports and domestic production of natural gas have both grown to meet China’s growing demand for natural gas, which stems from government policies that encourage power producers to switch from coal to natural gas.

Since becoming the world’s third-largest natural gas consumer in 2013 behind the United States and Russia, China’s domestic natural gas production has expanded along with natural gas pipeline and LNG imports, the EIA reported.

In 2021, China imported LNG from 23 countries. Australia has been the largest LNG supplier to China every month since April 2016. From January to October 2021. LNG imports from Australia averaged 4.1 Bcf/d, a 0.3 Bcf/d increase (9%) year over year, accounting for 40% of China’s total LNG imports.

LNG from the United States, Qatar, and Malaysia each accounted for about 11% of total imports to China. Imports from each country averaged about 1.1 Bcf/d.

LNG imports from the United States increased by 0.9 Bcf/d (320%) compared with the same period last year and ranked second behind Australia. China became the second-largest destination for U.S. LNG exports in 2021 (January through October), according to the U.S. Department of Energy’s LNG monthly reports.

LNG imports from Qatar and Malaysia increased by 0.3 Bcf/d compared with the same period last year.

The remaining 19 countries supplied a combined 2.8 Bcf/d (27% share) of LNG to China. LNG imports from Indonesia and Russia (the fifth- and sixth-largest suppliers) averaged 0.7 Bcf/d and 0.6 Bcf/d, respectively, the EIA reported. 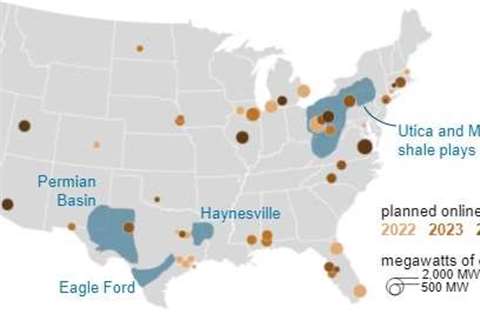