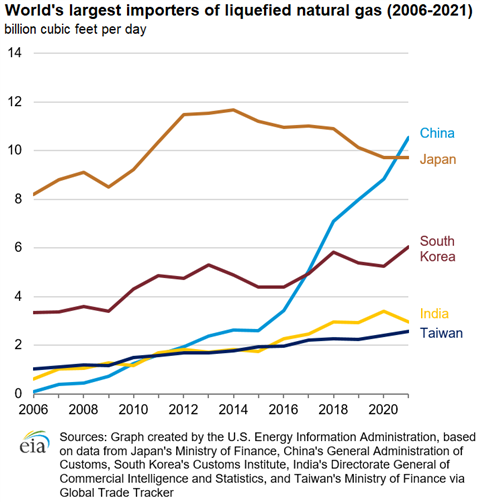 China became the world’s largest importer of liquefied natural gas in 2021, a study from the U.S. Energy Information Administration shows. The study, based on analysis of data from Global Trade Tracker and China’s Administration of Customs.

China began importing LNG in 2006 and its imports have grown steadily every year, except for 2015. China has steadily increased its LNG import capacity, which reached about 13.9 Bcf/d last year. That growth in capacity has enabled China’s LNG imports, the EIA reported.

By the end of 2022, China’s regasification capacity is expected to expand by an additional 2.8 Bcf/d, for a total of 16.7 Bcf/d, S&P Global Platts reported.

China’s imports and production of gas have risen as government policies have promoted coal to natural gas switching in an effort to reduce air pollution and meet emissions targets. In 2021, China’s domestic production reached 19.3 Bcf/d, about 54% of its total natural gas supply. Last month, the country released its 14th five-year plans, which set domestic natural gas production target at 22.3 Bcf/d by 2025, up 3.0 Bcf/d from 2021, the EIA reported.