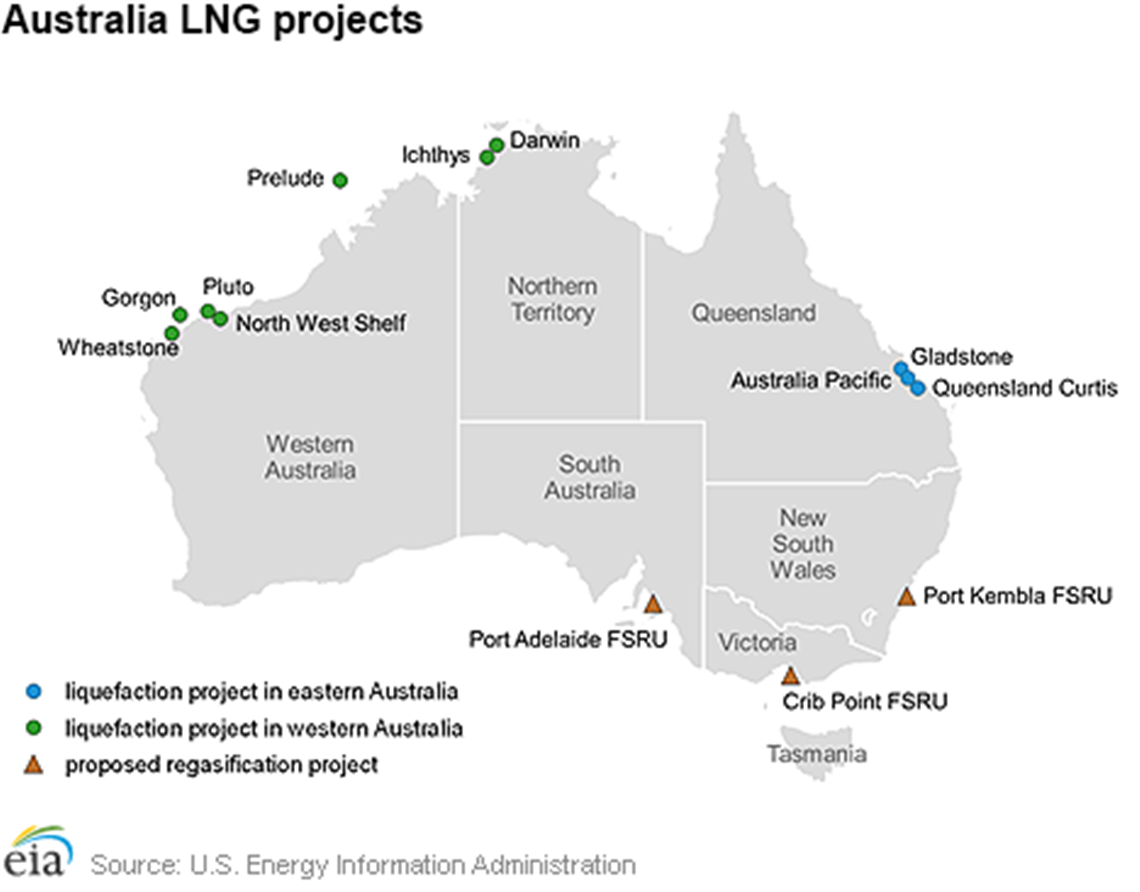 Prelude FLNG was the last of eight new LNG export projects developed in Australia during the past 10 years as part of a massive LNG export capacity buildout that cost an estimated $200 billion. Between 2012 and 2018, Australia’s LNG export capacity increased from 2.6 Bcf/d to more than 11.4 Bcf/d, making it the world’s largest, overtaking Qatar’s capacity of 10.1 Bcf/d.

Australia is on track to become world’s largest LNG exporter this year, according to projections by the Australia’s Dept. of Industry, Innovation and Science (DIIS), once the newly commissioned projects ramp up and operate at full capacity. In November and December of last year, Australia briefly overtook Qatar as the world’s largest LNG exporter, according to DIIS. Now DIIS forecasts that Australian LNG exports will grow to 10.8 Bcf/d in 2019–2021, once the recently commissioned Wheatstone, Ichthys, and Prelude projects ramp up to full production.

In the past several years, Australian natural gas markets in the eastern and southeastern states of Queensland, New South Wales, Victoria, South Australia, and Tasmania have been experiencing natural gas shortages and increasing prices. Because CBM production at some LNG export facilities in Queensland was insufficient to meet export commitments, project developers were supplementing their own production with natural gas purchased from the domestic market.

In addition, Australian western and eastern natural gas and electricity markets are not interconnected, so natural gas produced in the Northwest cannot be shipped to demand centers in the eastern states, where most of the Australian population lives. During the past few years, the Australian government has implemented several initiatives to address these challenges.

Several private companies proposed to develop LNG import terminals in eastern Australia to mitigate potential natural gas supply shortfall expected in the coming years. Currently, five proposed LNG import projects are in various stages of development. Of these projects, Port Kembla LNG (proposed import capacity of 0.26 Bcf/d) is in the most advanced stage. It has secured the required siting permits and an offtake contract with Australian customers. This project will use a Floating Storage and Regasification Unit (FSRU), Höegh Gallion, starting in January 2021.