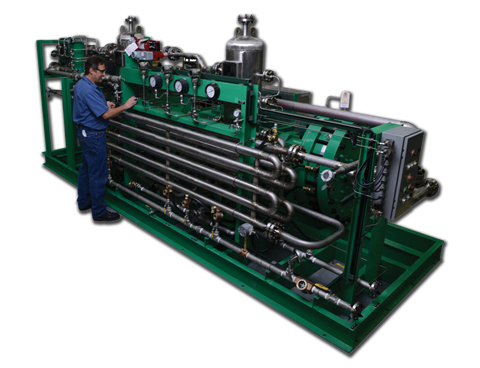 The ongoing efforts to slash carbon emissions in search of alternative energy sources has led to a lot of soul-searching in the energy industry as companies struggle to develop new products for sources of alternative energy. One company that has embraced the challenge is Arvada, Colorado-based Sundyne, a maker of industrial pumps and compressors used in multiple industries, including the energy industry.

Tom Helmreich, Sundyne’s global engineering & technology director, said the company has received a large influx of inquiries over the last year from potential customers in search of technologies that enable the development of alternative energy, including hydrogen and carbon capture.

As the lightest element, hydrogen poses unique challenges to the industry, but Sundyne has made hydrogen compressors for a long time in the refining industry, where it is used to clean up fuels and remove sulphur.

“We have extensive hydrogen experience,” he said. “Hydrogen has typically been in refining. We learned how to seal it and how to manage the equipment.” Refiners typically use compressors to circulate hydrogen through a catalyst, where the differential pressure is very low. “You are just getting it to move along and you can do that with a centrifugal compressor,” he said.

These newer, retail applications, such as hydrogen refueling stations, don’t use centrifugal compressors, but instead require diaphragm compressors, like Sundyne’s PPI compressors.

“In the retail space, you’re trying to take hydrogen out of an electrolyzer that might be at 15 psi and get it to 8000 or 10000 psi. And that is where a diaphragm compressor excels. It can get those very high compression ratios,” he said.

But the effort to decarbonize the energy industry has led to a surge in other technologies, such as carbon capture and storage, which still require centrifugal compressors.

Sundyne is traditionally known for its centrifugal compressors, but is now aggressively targeting hydrogen applications with its PPI line of diaphragm compressors.

“What’s unique about Sundyne is the breadth of our portfolio,” said Sundyne Chief Commercial Officer Aaron Bridges. “We don’t have just one solution for one opportunity. When we come in and work with a customer, we look at the overall ecosystem of what they are trying to achieve. It’s a whole carbon play all the way through the value chain.”

Sundyne is planning investments in blue and green hydrogen. It has compressors and pumps that work with electrolyzers and in hydrogen refueling stations. The company has seen orders for technologies that allow end users to safely boost pressures and lower emissions double over the last 12 months.

“Our machines allow us to split and push product into areas that make the most sense for the plant to be most efficient so the end user can achieve its ESG goals,” Bridges said. “We can mix and match our equipment to help the customer do what they want.” Its products are used in LNG plants, cryogenic gas plants and gas gathering systems.

The drive to find alternative energy sources has brought new entrants into the industry, many of whom are not experts in separation or transport of gas or water. “They come to us and say ‘here’s what we’ve got. How do you dry it up? How do we pressure it up?’” Helmreich said.