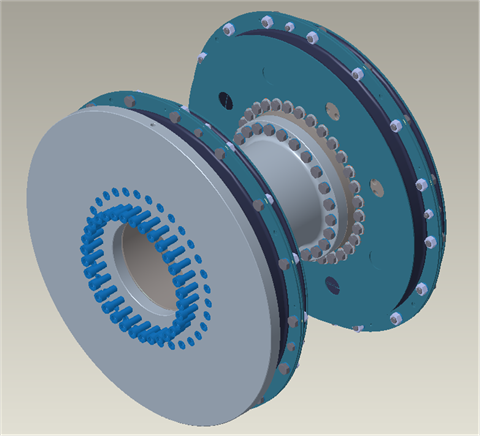 The Vulkardan-G coupling is designed specifically for use the higher horsepower engines, capable to handle torsional vibrations as well as radial and axial movement.

A unique rubber in shear coupling system designed by Vulkan USA is now entering its third summer after it was installed in a compressor operating at a gas production facility in West Texas. Since then, it has performed flawlessly for over two years and has outlasted a prior coupling system that failed repeatedly because of the heat issues.

The operator contacted Vulkan to help them develop a unique coupling system that could avoid torsional resonance and tolerate the intense heat of the region without failing. Vulkan designed the coupling system to withstand the intense heat of West Texas and submitted the design to an outside engineering firm that ran a torsional vibration analysis (TVA) on the design. After the engineering firm’s analysis showed the design would work as intended, Vulkan built a prototype at its facility in Winter Haven, Fla.

The engineers examined the design and found that it met all TVA parameters for the system and approved it for trial.

Vulkan technicians installed the coupling system on site in May 2019. The coupling went through a trial period between May and October, which included running every day through the summer heat of West Texas. The compressors are located out in the open, exposed to the elements.

The compressor system at the gas production facility combines a natural gas engine and an electric motor. The engine is a Caterpillar 3616 A3 (4735 hp at 1000 rpm) and the electric motor is a Hyundai unit rated 5000 hp.

The two drivers are capable of individually powering the compressor and enable the operator to utilize whichever form of energy is most cost effective at the time.

The technology is designed to switch seamlessly between drivers via a custom-designed clutch without loss of throughput by allowing the driver to take over the compression load.

The proprietary control system is designed and installed by Prime Controls using Allen Bradley technology that can be monitored on site or remotely. The transfer of the driver takes less than one minute and can be initiated whenever market conditions shift.

Soft Torsional Couplings are used on reciprocating compressors to isolate the driver motor. The coupling transmits the torque of the system and mitigates problems caused by torsional vibrations.

“After reviewing the system parameters with our engineering department, we felt we understood why the existing coupling was failing and that Vulkan could offer a solution to provide the coupling life they were looking for on their system,” said Eric de Leeuw van Weenen, director of business development at Vulkan USA.

Vulkan decided to use a custom cardanic designed using its Vulkardan-G product on the 5000 hp system. This unit is been specifically designed for use in installations that require a high level of torsional flexibility and torque transmission capacity. The product was designed to include favorable radial, axial and angular misalignment capabilities, he said.

The Vulkardan-G coupling is designed specifically for use the higher horsepower engines, capable to handle torsional vibrations as well as radial and axial movement, he said.

Although, this coupling is generally used on large generator sets, such as Caterpillar, the design is custom-made for their compressor application, with a 46 in. diameter, overall length of 35 in. and total weight of 2400 lb.

Vulkan designed the coupling so that it could drop in the unit without modifications to the existing equipment. The end user was even able to re-use their existing coupling hubs, he said.

After initial startup, the end user wanted to run the coupling through the summer of 2019. The Vulkardan-G coupling ran without any issues through the summer. A team from Vulkan and Engineering Dynamics Incorporated (EDI), an independent engineering firm based in San Antonio, met on site in October 2019 and shut down the compressor to evaluate the coupling’s condition.

Once all equipment was in place, the unit was run through all of the compressor load steps with the motor drive and engine drive, over the full speed range, multiple starts, and emergency shut down (ESD), to check for any issues or concerns. After examination of the coupling, the physical appearance showed no signs of rubber degradation and the unit performed as intended, he said.