The United States has achieved the largest liquefied natural gas (LNG) export capacity and highest LNG exports of any country, according to the latest report from the U.S. Energy Information Administration (EIA). As of July 2022, the U.S. has surpassed previous leaders Australia and Quatar in export capacity, and has exceeded any other country in LNG exports, with exports averaging 11.1 billion cu. ft. per day (Bcf/d) during the first half of 2022.

The U.S. became the global leader in LNG export capacity when the Calcasieu Pass LNG export terminal project placed all of its liquefaction trains in service ahead of schedule. The trains were originally set to be in service by August. Calcasieu Pass is a 1.3 billion Bcf/d liquefaction facility located in Cameron Parish, La. The facility, which uses mid-scale liquefaction technology, started LNG production 30 months after its final investment decision — the shortest construction period for any U.S. LNG export project so far.

In addition to 18 mid-scale liquefaction trains, Calcasieu Pass includes an onsite natural gas-fired plant to generate electricity for the facility’s operations; three pre-treatment trains; two LNG storage tanks (with a capacity of 4.4 Bcf each); and two shipping berths capable of loading LNG vessels with carrying capacities of up to 185,000 cu. meters (4 Bcf). The terminal receives its feedgas through Venture Global’s 24-mile, 42-in.-diameter TransCameron Pipeline, which has interconnections with the ANR, TETCO, and Bridgeline pipelines. 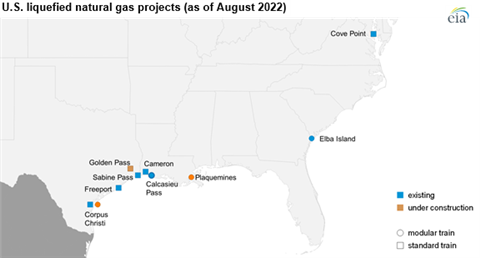 U.S. capacity expansion is far from finished. It is set to increase even further following completion of three additional projects. The furthest along is Golden Pass LNG, which started construction in 2019. The project includes construction of three standard-size liquefaction trains with peak LNG production capacity of up to 0.8 Bcf/d per train, for a total capacity of 2.4 Bcf/d. The facility is on the site of an existing regasification facility and will use shared infrastructure, which helps to reduce project costs and shorten the construction timeline.

Once completed, the three export projects will expand U.S. LNG peak export capacity by a combined 5.7 Bcf/d by 2025. 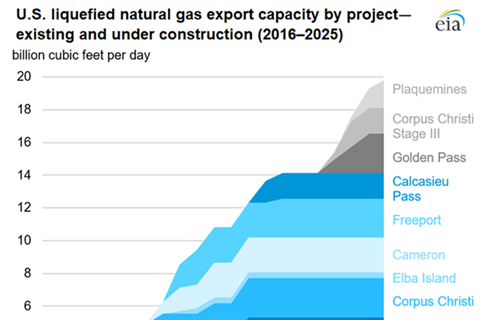 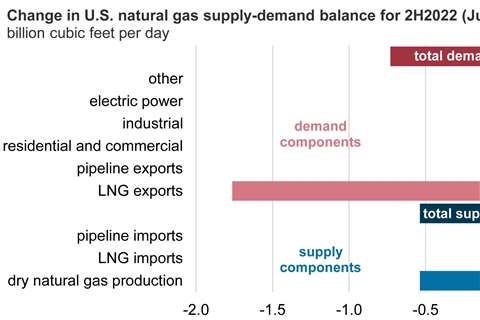