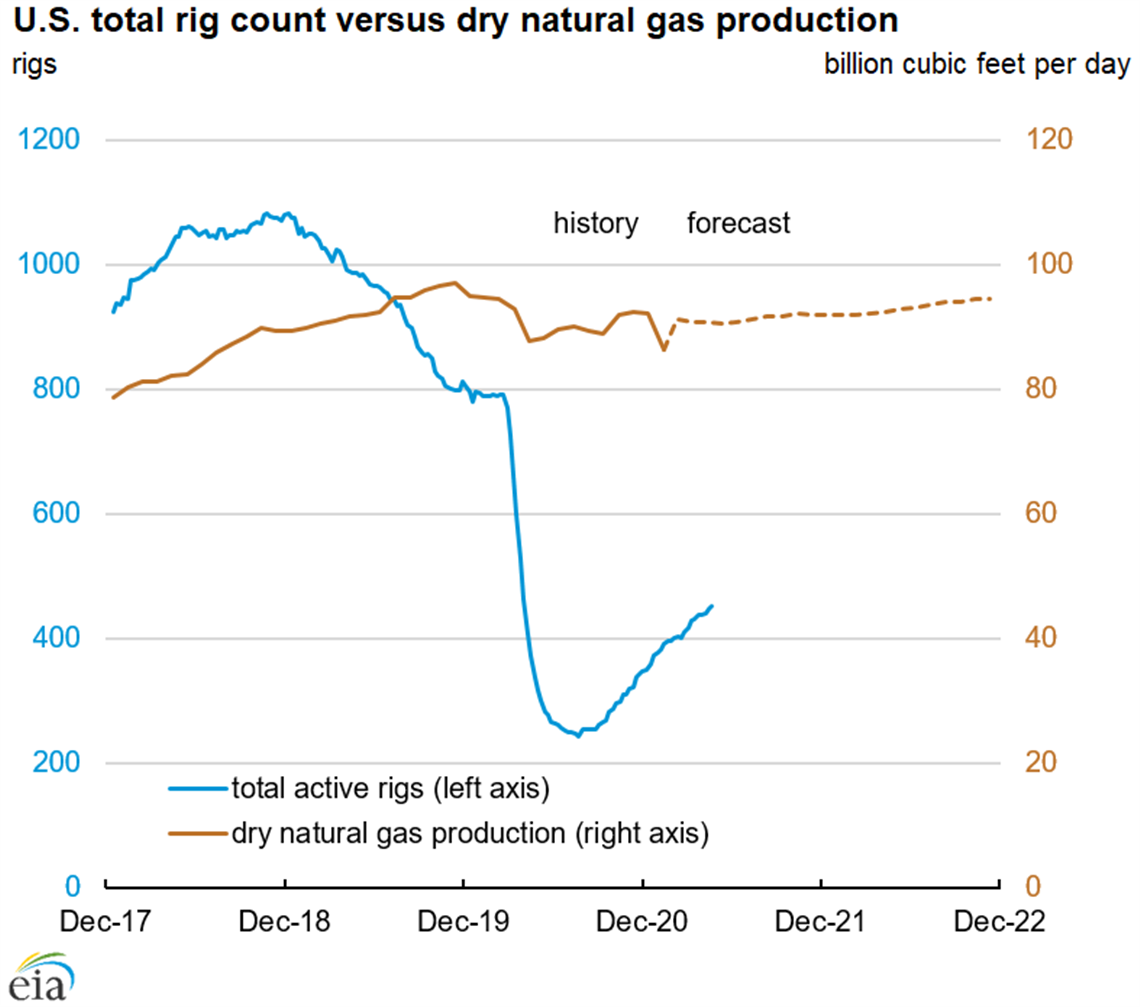 U.S. gas producers are expected to produce an average of 90.8 Bcf/d in May, up from 87.8 Bcf/d one year ago, according to recent forecasts from the U.S. Energy Information Administration.

May 2020 was the low point for U.S. monthly gas production, with the exception of February 2021, when weather-related events forced a dramatic decline in production. Gas production had fallen in May 2020 because of the response to the COVID 19 pandemic and warmer weather, both of which resulted in a decline in demand for natural gas and a decline in prices.

Going forward through the end of 2022, the EIA expects U.S. gas production to grow, averaging about 94.4 Bcf/d in November and December of 2022.

The increase in gas production is, in part, the result of increased drilling activity. The number of active drilling rigs in the U.S. fell to 244 in August 2020, the lowest level since at least 1987, according to data from Baker Hughes.

The rig count is gradually recovering and, as of May 11, the reported number of active rigs had reached 453, 100 of which were directed at natural gas. Oil-directed drilling also resulted in higher natural gas production because of the associated gas that comes with the new oil production.

Natural gas producers are focusing on boosting production from the Marcellus and the Utica formations in the Appalachia Basin and the Haynesville formation in northeast Texas and northwest Louisiana.

Most of the additional rigs operating are in the Haynesville formation, close to the liquefied natural gas export terminals and industrial demand on the Gulf Coast. Within the Haynesville, there are 47 active rigs, nearly the same as one year ago, when 50 rigs were in operation.

As the number of active rigs climb, overall demand for gas has fallen in response to lower demand for heating in residential and commercial sectors. Total demand fell by 10.8% compared with the previous week, according to statistics from IHS Markit.

Natural gas consumed for power generation rose 1.9% from the previous week, even as residential and commercial consumption fell by 39.7% in response to warmer weather in most of the country.

Natural gas exports to Mexico fell 2.2% but still exceeded 6 Bcf/d, but U.S. LNG exports were essentially unchanged from the previous week. A total of twenty one LNG vessels carrying 75 Bcf leaving the U.S. A total of 75 Bcf left the U.S. between May 13 and May 19, the EIA reported.