Summer gas prices in U.S. rise to highest level since 2014 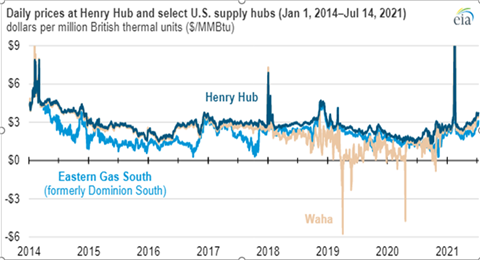 Tighter supplies, an increase in exports and higher demand for electricity production have pushed a key benchmark for natural gas to its highest level since 2014, the U.S. Energy Information Administration (EIA) reported.

Prices have risen in response to tighter supplies and a surge in demand in recent months. This summer, an increase in exports has reduced the supply available for domestic consumption even as warm weather this summer has led to an increase in demand from power producers, the EIA reported.

The U.S. National Oceanic and Atmospheric Administration (NOAA) reported that June 2021 was the hottest June on record for the U.S. Drought conditions in the western United States have led to a decrease in hydroelectric generation and an increase in gas-fired electricity generation.

According to the EIA Hourly Electric Grid Monitor, natural gas-fired generation in the Northwest averaged 240 gigawatthours (GWh) in June 2021, an increase of 50% from last year. During the same period, hydroelectric generation fell 20% to 410 GWh.

U.S. working natural gas inventories are now at 2,629 Bcf, 189 Bcf below the five-year average and 543 Bcf below last year’s inventories at this time. The EIA said it expected tight U.S. natural gas market balances will continue through the rest of 2021. It has previously forecast forecast the spot price at the Henry Hub will average above $3.00/MMBtu through March 2022 and will average $2.96/MMBtu in the second half of 2022.

A separate EIA report showed that U.S. exports of LNG continued to grow in the first half of the year, although In June, those exports slipped moderately as the result of maintenance on several pipelines that deliver natural gas to U.S. LNG export facilities.

U.S. exports averaged 9.5 Bcf/d in the first half of the year, an increase of 41% or 2.8 Bcf/d from the same period last year. The increase in exports this year comes after 2020, when LNG exports fell to record lows before hitting consecutive records in November and December of 2020.

The surge in exports this year stem from an increase in international gas and LNG spot prices in Asia and Europe and an increase in global LNG demand after the loosening of restrictions from COVID-19 and unplanned outages in LNG export facilities in Australia, Malaysia, Nigeria, Algeria, Norway and Trinidad and Tobago.

In Asia, colder than normal winter temperatures led to increased demand for LNG imports. Gas demand in the spring continued to climb in response to post-winter inventories, which added to unusually high natural gas prices and drew in additional imports of LNG supplies, particularly from the U.S., the EIA reported.

In Europe, natural gas storage inventories also fell in response to a colder than expected winter. In addition, warmer than expected temperatures in May and June fueled demand for gas from European power producers and pushed spot gas prices higher.

As international demand for gas has climbed this year, spot prices at Henry Hub have been lower than other international benchmarks, creating a clear arbitrage and supporting record-high volumes of U.S. LNG exports.

U.S. LNG exports also increased because of new export capacity added in 2020. The final liquefaction units were commissioned at Freeport, Cameron and Corpus Christi LNG and the remaining small-scale units were placed in service at Elba Island LNG. Taken together, the projects boost U.S. LNG peak export capacity by 2.3 Bcf/d to a total of 10.8 Bcf/d, the EIA reported.

Like last year, Asia remained the main destination for most exports from January through May and accounted for 46% of the total. The European market followed with a five-month average of 37% market share. Exports to Latin America also increased. Brazil in particular saw an increase in LNG imports from the U.S. as it is experiencing the worst drought in more than 90 years.

Looking forward, the EIA said it expected LNG exports to remain high for the rest of the year.