Petroleum and natural gas remain the most-consumed sources of energy in the United States through 2050, but renewable energy will be the fastest growing, according to an analysis by the U.S. Energy Information Administration (EIA).

The EIA’s Annual Energy Outlook 2022 predicts energy consumption will increase in the United States over the next 30 years across a variety of economic scenarios as population and economic growth outpace energy efficiency gains. 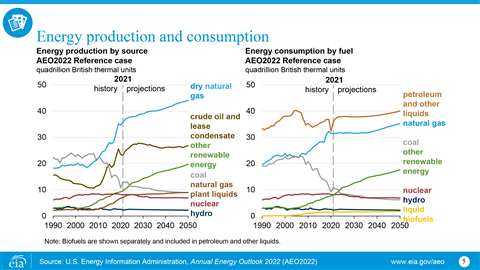 at about US$90 a barrel in constant dollars—consumption of natural gas will continue to grow as well over this period, maintaining the second-largest share of all fuel sources, driven by expectations that natural gas prices will remain lower than historical levels.

The share of generation from renewable energy sources, such as wind and solar, will rapidly increase over the next 30 years as state and federal policies continue to provide significant incentives to invest in renewable resources for electricity generation and transportation fuels.

“New technologies will continue to drive down the cost of wind and solar generators, further increasing their competitiveness in the electricity market, even as assumed policy effects lessen over time,” according to the EIA.

“In the reference case, we project that U.S. natural gas exports will rise through 2050, primarily driven by increases in liquefied natural gas capacity, global natural gas consumption, and pipeline exports to Mexico and Canada,” according to the EIA.

Through the projection period, onsite generation of electricity expands significantly in the U.S. residential, commercial, and industrial sectors, reducing growth in electricity purchased from centralized generators. 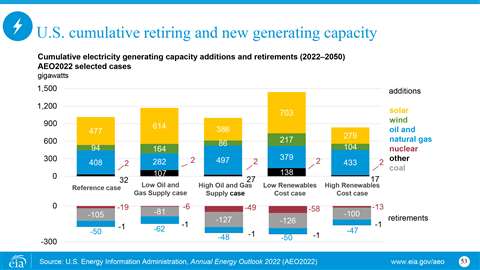 “We project that residential, commercial, and industrial sector onsite solar PV systems will account for more than 8% of total electricity generation by 2050, almost double the share held by onsite power generators in 2021,” the report states.

“The increase in demand primarily follows evolutionary electric vehicle (EV) technology and market developments, as well as current fuel economy regulations. Both vehicle sales and utilization (miles driven) would need to increase substantially for EVs to raise electric power demand growth rates by more than a fraction of a percentage point per year.”